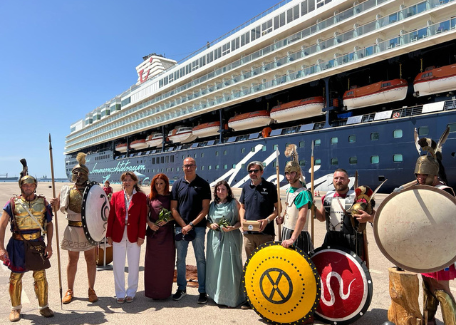 Yesterday, June 26th, 2022, the elegant cruise ship Mein Schiff Herz arrived in the port of Taranto, berthing early in the morning at the St. Cataldo pier.

The ship, part of TUI company, a historic German tour operator based in Hamburg, was the last of the fleet to return to service in April.

About 262 meters long, Mein Schiff Herz has 14 decks, 12.000 square meters of open space and an unmistakable livery characterized by the blue colour on which the name of the ship stands together with words in German that evoke the well-being of the voyage (among these Erlebnisse, experiences, and Gelassenheit, serenity). The passengers, more than 1.400 and for the most part of German nationality, love so much the excursions related to outdoor activities and sustainable mobility that the company makes available to them in every port of call - including the Taranto one - various electric vehicles, including numerous pedals assisted bicycles, for a travel experience with a low ecological impact.

Cruise passengers on board the Mein Schiff Herz were able to spend a day exploring the beauties of the Apulian territory, visiting Taranto, Manduria, Ostuni, Alberobello and discovering the faunal heritage of the Gulf of Taranto with dolphin watching tours.

To welcome the passengers with an exclusive show was the historical re-enactment group "Cavalieri de li Terre Tarentine" which has been promoting the culture and history of the territory since 2004 and which for the occasion has set up a suggestive welcome on the quay with figures dressed in typical costumes of the Magna Graecia period.

This first call of Mein Schiff Herz in the Ionian city-port represents the ninth maiden call of the year in Taranto, which has welcomed 23 cruise ship calls since the end of March. The rise of the port of Taranto began in 2021 with the kick off of terminal operations in May, thanks to the collaboration with the passenger services operator Taranto Cruise Port, part of the Global Ports Holding network. The first months of 2022 saw an increase in passenger traffic and companies served compared to the previous year. Mein Schiff Herz will return in August for her second and final call scheduled for the 2022 season.

Celebrated upon its arrival in Taranto by the spectacular greeting with water games of the tugs, the Mein Schiff Herz was welcomed by a delegation made up of the president of the Port Network Authority of the Ionian Sea, Sergio Prete, by the deputy mayor and councilor of the Municipality of Taranto, Fabrizio Manzulli, and by Raffaella Del Prete, which from July will replace Antonio Di Monte at the helm of Taranto Cruise Port, hosted on board by Commander Helge Wrage for the traditional crest exchange ceremony. In addition to the representative plaque, the AdSP paid homage to the captain with valuable volumes on the collections of the National Archaeological Museum of Taranto and the Diocesan Museum.

“We are pleased to welcome Mein Schiff Herz in Taranto and to host international travelers curious to know our territory and its beauties, which have remained hidden for too long - said Sergio Prete, President of the Port Network Authority - Thanks to our constant international promotion work, Taranto, the city of two seas, is on the maps of cruise lines around the world. This past week was particularly intense with the calls of three different companies in the port of Taranto - MSC Cruises, P&O Cruises and TUI. Passenger traffic in the first part of the year saw an increase compared to 2021 with the gradual recovery of global tourism, which also led to a greater variety of cruise passengers arriving in Taranto, from all over Europe but also from overseas. The synergy with the institutions, in particular with the Municipality of Taranto, is of fundamental importance to better manage and coordinate the reception of the growing number of "sea travelers" from a sustainable perspective. Cruise tourism represents a sector with a strong economic impact and we hope that the positive trend will continue in the second half of the year”.

“We welcome TUI Cruises with open arms, pleased that the largest company in the German market has finally made a call in Taranto – said Stephen Xuereb, President of Taranto Cruise Port – We hope that the beauty of the area, the colorful Magno-Greek style welcome organized by us and the operational capabilities of Taranto Cruise Port will convince the company to include our port also in its future itineraries. TUI Cruises is one of the new names of 2022, a year full of news and already characterized by important numbers in terms of passengers, calls and Cruise Lines represented, undoubted result of the constant promotion work implemented by the whole port cluster in synergy with the local authorities, fruitful collaboration to be safeguarded and developed also in view of the new challenges announced by the already promising numbers of the next seasons”.

Other News
16.09.2022 Taranto Cruise Port bring home the award! Read More
11.05.2022 Cruise traffic in the port of Taranto continues to grow with the double-calls of Celebrity Constellation and Msc Splendida Read More